“I don’t need you tell me how f***ing good my coffee is.”  A little break to Nijmegen, that’s Ni-meh-khen, Holland. 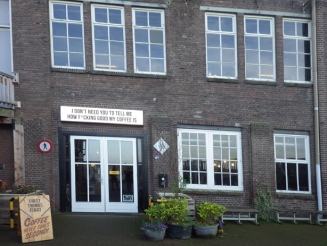 A sign above a cafe next to the river Waal, tells me, somewhat hostilely, that my approval isn’t needed. I enter, expecting to be treated with contempt by the hipsters within and am immediately greeted warmly in Dutch, only to be apologised to seconds later for not having been spoken to in English first and offer me an open topped cheese sandwich. They clearly aren’t committing to the sign.

There are many things that Dutch people love. Among them is cheese. And beer. This may be stopping short of the glaringly obvious regarding the Netherlands, but I never knew how much that gave away their character.

It’s not in the way that us English like beer or cheese. Not the Brits on tour – stag weekend in Amsterdam kind of way. It’s a relaxed Continental kind of way, not akin to Amsterdam.

As the city is only 30 km from Dusseldorf, and only an hour and half by train from Schipol (that’s ski-pole) airport, Nijmegen is an accessible treat. Pronounced with a rolling G, Nijmegen, is home from home, full of chilled out people chattering away on bicycles.

Cheese is in everything in Holland. They have it on bread for breakfast with an egg. It’s in every salad and sandwich in various forms. And for dinner, well why not sprinkle your chips and mayonnaise with cheese, or your waffles, or kroketten? Nijmegen’s oldest café is Café in de Blaauwe Hand on Grote Markt behind the Hoofdwacht (or guardroom). It translates as ‘in the blue hand’ and they serve among other wonderful treats, Flammkuchen- a German inspired pizza from across the border, with yes, lots of cheese.

In world war two, the city was bombed by friendly fire and now has pockets of pre-fab 1960s buildings mixing with typically Dutch architecture. It makes St Peter’s church, the oldest and largest Roman Catholic gothic style church in Nijmegen, look obscure but refreshing. Like an oasis of complicated architecture with it’s ornate Renaissance tower standing above the city skyline like a beacon in a sea of 1960s concrete.

That said, Nijmegen is not an ugly town. Like Amsterdam, Nijmegen is full of art, old brew- houses and that general Dutch relaxed attitude to everything. But unlike Amsterdam I found no on-display tourist attraction red light district, or large cafes full of cannabis smoking tourists.

I have tried for years to understand the more European attitudes to food and beer, the way they know when they’ve had enough and over the top binge drinking seems a far cry from many of our towns on a Saturday night. Maybe it’s the efficient trains with their live journey screens in every carriage? Or maybe it’s Viking culture passed down through generations of English heritage that differentiates us from our Dutch cousins? Either way I think in Nijmegen I found the explanation.

It’s not about restriction, but comfort. Being comfortable, or enlightened, about all manner of matters, whether that’s, food, beer, drugs, politics, work or sex, seems to bring about that typically Dutch calm over everything, and overdoing it for the sake of itself seems just a little bit silly.

Time is slower in Nijmegen, just fast enough to get you in to gear, just slow enough not to break a sweat. 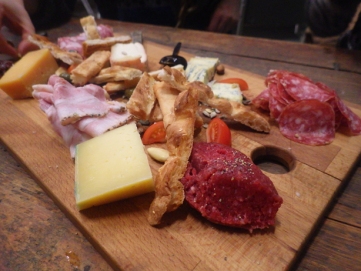